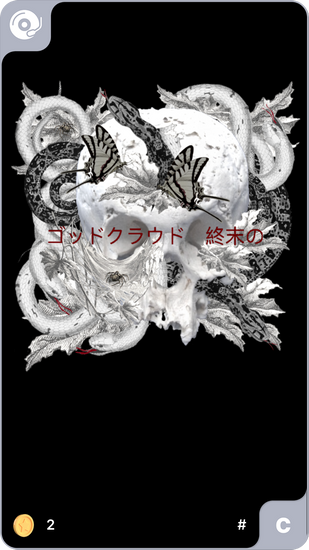 As a life time anime lover, and to honor his first global supporters, Godcloud presents a Japanese title variant of Godcloud On Doomsday. Having his early finger drumming performances shared by the Japanese branch of Akai, Godcloud gained a cult following in Japan. He gained the title “sama” which is reserved for highly skilled individuals. Seeing the name “Godcloud” written as “ゴッドクラウド“ Godcloud got the kanji tattooed on his right forearm.


The title of the EP itself is named after one of Godcloud's favorite Twilight Zone episodes. This 5 song collection chronicles struggle and redemption as traversed by Godcloud prior his entry into Web3. Godcloud dives deep into his musical tool chest and viscerally translates heartbreak, passion, victory and trauma through every note played, and every lyric uttered.


Godcloud on Doomsday was written, performed, and produced entirely by Godcloud, with mixing and mastering by Ian Fait at Wicked Squid studios in Rochester New York. It is Godcloud's genesis EP on the blockchain.

This collectible features one of 8 known designs in the Godcloud On Doomsday set created by GODCLOUD. Go see more from this set in the marketplace.

Godcloud
One of 200 common cards minted of this release edition.
Locked Content
Buy Direct From Artist for $12