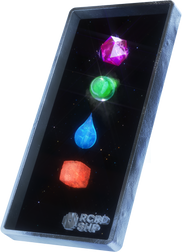 Music Over Matter (MOM) is predicated on the idea that the music itself is most important—not streams, chart positions, or marketing campaigns. Through The Next Format™ in music, RCRDSHP is enabling us to elevate our creations like never before. RCRDSHP allows us to take our physics-based concept to another level with stunning artwork. Music by Amos & Riot Night, DIM3NSION, Knock Out, Vlind, Black XS, MOM label boss MarioMoS, and even RCRDSHP Founder and CEO Obie Fernandez himself are featured in this drop.

This pack drop is a first for RCRDSHP: each of the three card slots includes a rare card, and some packs could contain up to three rare cards! The ‘Astronaut’ grants its holder special free access to Music Over Matter live events. If you are a DJ, take note of the ‘DJ Headphones’ collectible which unlocks a DJ slot for the holder at an upcoming Music Over Matter event! Finally, there's a rare, commemorative HIGHER STATE T-shirt artifact that's redeemable for physical merch: a limited edition T-shirt signed by the team and mailed to you.

You told us you wanted more excitement and reasons to collect going into new pack drops, and we listened! This pack drop has FIVE associated challenges and a GRAND PRIZE drawing at the end of April Five lucky winners will receive a legendary Obie Fernandez artist card that entitles the holder to one airdropped, low-serial-number collectible of EVERY new common collectible that Obie Fernandez releases on RCRDSHP for life! It’s truly a gift that keeps on giving.

This pack drop features not one, but ten surprise airdrops to delight and reward faithful Music Over Matter collectors with unique items ranging from special limited-edition collectibles to physical merch to exclusive mixtapes.

MORE ABOUT MUSIC OVER MATTER (MOM)

Stages at our live events and all music releases on MOM are assigned a physical matter state depending on style and tempo. Slower techno and progressive house tracks are generally considered SOLID. Most kinds of trance are categorized as LIQUID. Psytrance, hard/peak-time techno and tech trance are generally considered GAS. From time to time we also showcase hardstyle, breaks, dubstep, drum and bass, as well as other boundary pushing up-tempo music as PLASMA.

Music Over Matter: Higher State marks the debut of a brand-new, RCRDSHP-exclusive series called Element 119. It’s named after the hypothetical, yet-to-be discovered element in the periodic table and sheds light on up-and-coming talent worldwide. Artists highlighted in the debut of the series include Allan McLuhan, Mike Sang, AVNDA, and Fher Vizzuett.