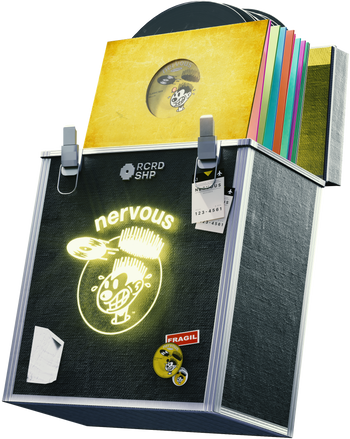 Repping underground dance and nightclub culture since 1991, Nervous Records is one the seminal labels that helped shape the New York house sound and has released music from many legendary producers, including Masters At Work, Todd Terry and Frankie Knuckles.

As one of the longest standing independent record labels in the US, Nervous Records has built its reputation through a willingness to take chances on new sounds and new producers. This spirit has enabled Nervous to build a catalogue of hits that spans the complete range of underground dance music. The label was famous almost immediately when it launched because of its eye-catching, distinctive cartoon character logo. In addition the first three releases were produced by Roger Sanchez, Kenny Dope, and Todd Terry respectively, representing three of the best house producers of that time.

The 'Introduction to Nervous Records' pack drops on October 4th at 5pm BST / 12pm EST / 9am PST via RCRDSHP and includes exclusive edits of 10 tracks, giving you a taste of the label’s early 90s releases from artists including, Mood II Swing, The Burrell Brothers, Frankie Feliciano and Wayne Gardiner. Along with this pack, Nervous Records are rewarding buyers with unreleased music and a chance to win rare vintage merch, as well as future benefits and airdrops.