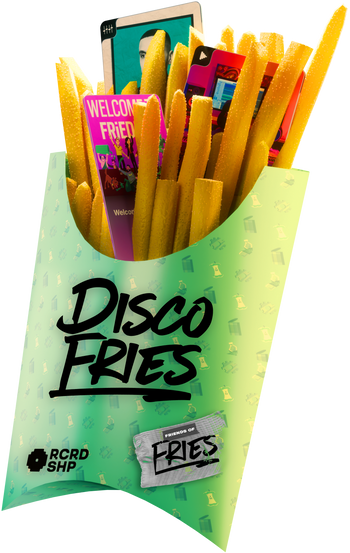 The Disco Fries have embarked on an exciting new journey by releasing NFT collectibles on RCRDSHP over the past several months. Now, they’re spending their first full drop on the platform sharing the love.

Friends of Fries features music and other exclusive content not only from the duo, but their collaborators Viiq, Modern Machines, Thando1988, Tensteps, Bexxie, and Big Nab as well. Every single release collectible contains RCRDSHP-exclusive music. Not only that, but there are more challenges than in any drop we’ve ever done before!

FREE NFT:
If you’re new to NFTs, Disco Fries have just the thing to get you started. They’re offering a 100% free ‘Welcome to #FRiEDFAM’ collectible that includes an exclusive DJ mix to give you an idea of what to expect from the full drop. Get yours here!
https://app.rcrdshp.com/campaigns/friedfam

FREE PACK:
Share the upcoming Disco Fries drop on your social media for a chance to win a free pack of collectibles from this drop! Ten of the people who complete the requirements will be selected at random to receive one pack each. Follow the Disco Fries on social media as they will share the exact terms of this giveaway in the days to come.

AIRDROP:
Purchasing a pack from the upcoming Friends of Fries drop gets you an invite to an exclusive online event by the Disco Fries. Attend the event and you will receive an exclusive ‘You Were Here’ moment collectible via airdrop. That’s not all though—read on to find out what else!

CHALLENGES:
There are two collection challenges in this drop. The first challenge is to collect all release and release plus cards (except for rare release cards). Every player who completes the challenge will get to submit a song of their choosing to be included in a Disco Fries bootleg DJ mixtape consisting of all songs submitted. The second challenge is to collect every artist card in the drop. Every player who completes this will receive a DJ mix of songs selected by the ‘Fries themselves.

That’s only the tip of the iceberg. Every player who buys a pack, tweets about the drop, and connects their Twitter to RCRDSHP will receive a video of ‘Won’t Be The Same’ by Disco Fries played on saxophone by world-renowned smooth jazz composer Kenny G.

Players will also get to explore RCRDSHP’s game functionality with this drop. There are five different recipes for mixing, a function in which players can combine two or more release cards to yield a mashup card. Four of the recipes will be revealed one week after the drop, but players will have to find the final one themselves through trial and error. We will also announce challenges for the massing and burning functions two weeks after the drop.

Players who complete all of the aforementioned challenges as well as attending the exclusive event will get a special in-real-life gift. Their favorite Disco Fries card will be printed on metal, autographed, and sent to them. If they can’t decide on one card, the duo will even print and sign a collage of cards!

Last but definitely not least are the rewards for the most avid collectors of this drop. The twenty players who purchase the highest number of packs from this drop apiece will get invited to a special online event that will be closed to the general public. The player who single handedly buys the most packs will get to hang out with the Disco Fries in real life, spending a day doing activities proposed by the player themselves.

Pre-order your pack from Friends of Fries right now!

Cards in the pack